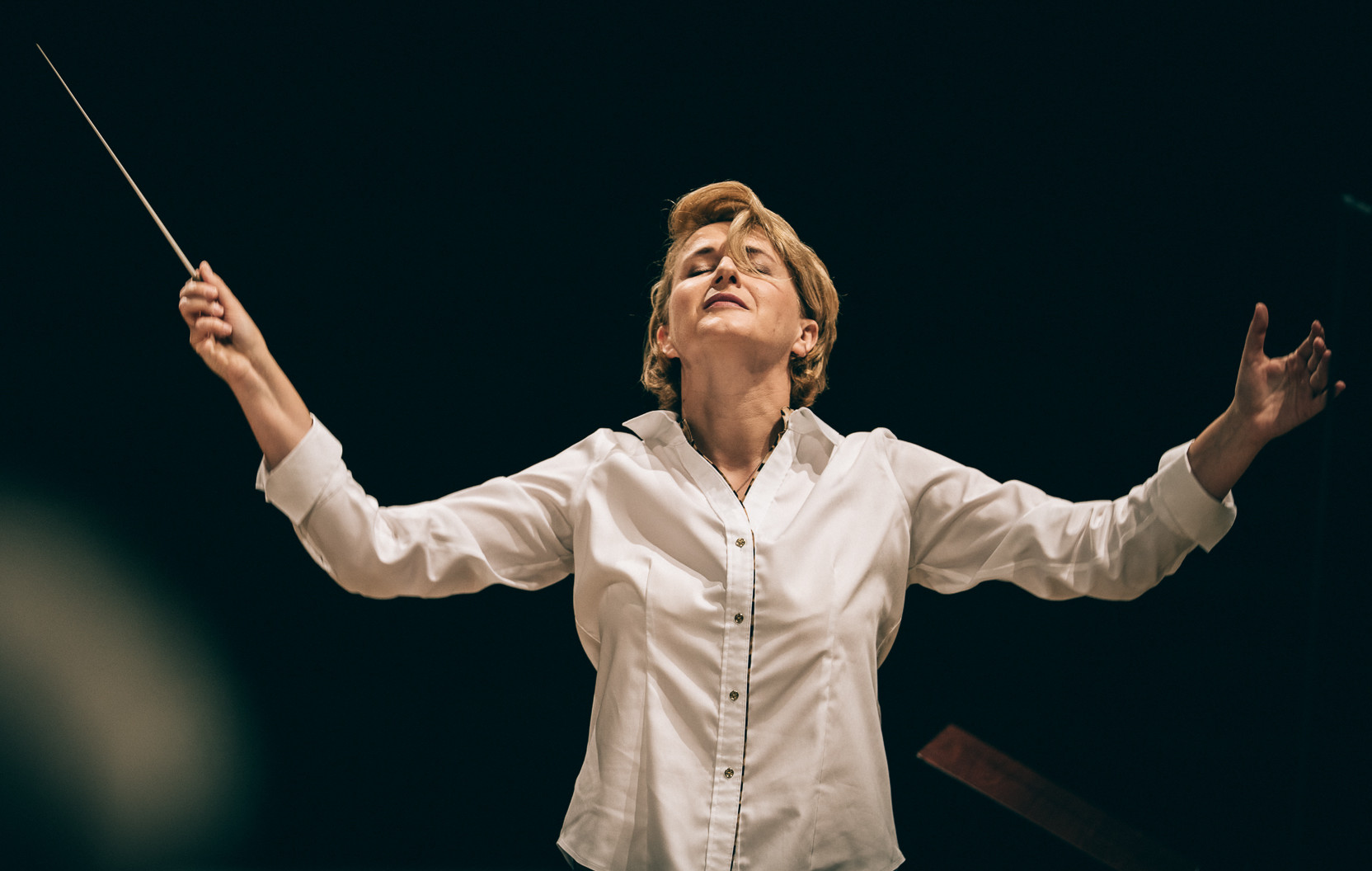 Monika Wolinska, who is a recipient of Gloria Artis – Medal for Merit to Culture for distinguished contribution to Polish culture awarded by the Minister of Culture and National Heritage of Poland, and also has been awarded an honorary medal Meritorious For Polish Culture, enjoys an active career as a conductor on concert stages of the world conducting many orchestras
of Europe, Asia and America.

Her art of conducting was very accurately described by New York critics after her Carnegie Hall concert, pointing out her „great sensitivity to the actual sound of the instruments in the orchestra”. Her successful Carnegie Hall performance, which ended as a standing ovation and enthusiastic reception by the critics, was at the same time the first ever performance by Polish female conductor.
In 2013 Monika Wolinska received More beautiful Poland award, which is granted to „special people who create beauty, that could be shared with the world”. The award is a part of European Union’s More beautiful Poland in the UE program. In 2016 she was awarded with Success award – a statue granted by Rotary Club in Gorzów Wielkopolski. In 2018, she received a special award for lifetime artistic work, in form of silver statuette of Kazimierz Andrzej Jaworski for achievements in the field of artistic creation, dissemination and protection of cultural heritage, awarded by President of City of Chełm.

In 2012 she made her debut CD recording with Sinfonia Varsovia. The album contains the premiere recording of the complete symphonic poems by the great Polish composer Eugeniusz Morawski. The album received excellent reviews and was nominated for Fryderyk 2013 award.

In October 2014, she conducted an All-Mahler concert with one of the greatest baritones of our times Thomas Hampson, who invited by Monika Wolinska has given a concert in Poland for the first time in his career. She also performed with such renowned soloists as Akiko Ebi, Roby Lakatos, Roman Simovic, Abdel Rahman El Bacha, Rafał Blechacz and many others.

She has made her debut as a conductor in 2004, conducting at Lucerne Music Festival where she worked under supervision of Pierre Boulez. For many seasons she was an assistant conductor to Jerzy Semkow, and in the season of 2007/2008 she also assisted Krzysztof Penderecki. Monika Wolinska is a great promoter of contemporary music. She performed multiple times at Warsaw Autumn Contemporary Music Festival as well as Generations concert cycle in Warsaw. Since 2013 until 2017 she was an Artistic Director of Wojciech Kilar Contemporary Music Festival.

In 2014 she conducted a world premiere performance of Jan A.P. Kaczmarek’s Universa – Open Opera, composed to celebrate 650th anniversary of Jagiellonian University in Cracow. In 2019 she also conducted the world-premiere performance of Silesian Rhapsody by Jan A.P. Kaczmarek, which was composed to commemorate 100th anniversary of Silesian Uprisings. This large production was performed at the Silesian Stadium in Chorzów for over 30 000 audience members and included over 300 artists in the ensemble.

She started her artistic education at the age of six. As a holder of three master degrees in the field of music, she graduated in violin, conducting vocal and instrumental ensembles as well as symphony and opera conducting majors at The Fryderyk Chopin Academy of Music in Warsaw. She also actively participated in master classes led by Kurt Masur, Pierre Boulez, Antoni Wit, Gabriel Chmura, Marin Alsop. Apart from her musical education, in 2015 she also graduated from Warsaw University, majoring in Management of Culture.

Monika Wolinska is also active in the field of education. She is Professor of Conducting at The Fryderyk Chopin University of Music in Warsaw, and since 2019, she also holds a position of Head of Chair of Symphony and Opera Conducting Department. She also published a book about great polish conductor Stanisław Wisłocki, titled Stanisław Wisłocki – conductor and pedagogue,
In the years of 2003-2009 she cooperated with the Symphony Orchestra at The Academy of Music in Warsaw. In the season of 2007/2008 she was appointed as a Permanent Conductor of the Polish Orchestra Sinfonia Iuventus. In the years 2013-2017 Monika Wolinska served as Principal Conductor and Artistic Director of Gorzów Philharmonic Orchestra, with which she has given many concerts in Poland as well as on tour. In 2015 she has recorded with Gorzów Philharmonic Orchestra Bronisław Kaper/Jan A.P. Kaczmarek – ENCOUNTER, an album featuring film music composed by two Academy Award winning composers.

In June 2017, as one of the six participants, she has been chosen among 161 candidates from all over the world to take part in 2017 Hart Institute for Women Conductors program at The Dallas Opera.